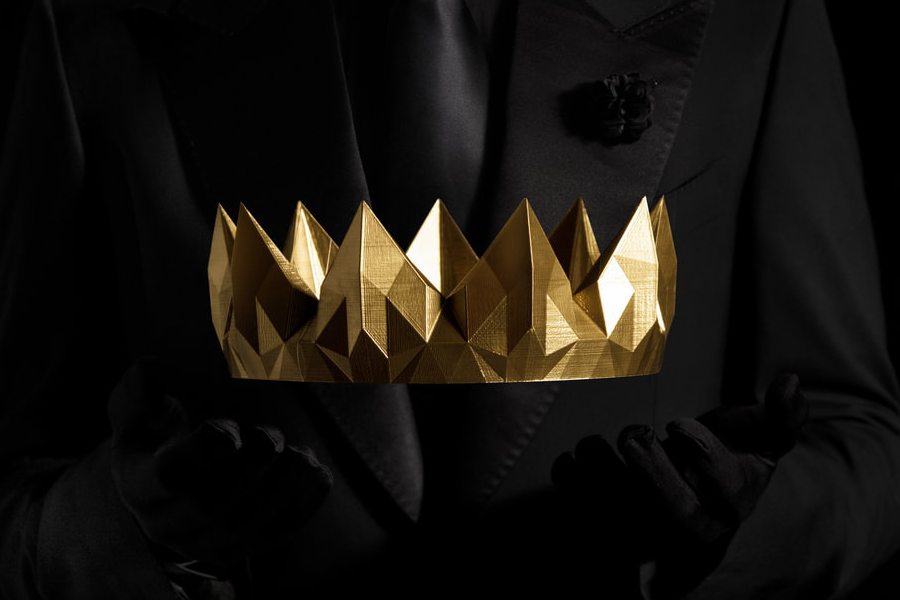 I had not been seated long when I started hearing the sound of the engine stalling: a blunt tremor, and then silence. The space station on earth announced the first stop.
I got off the space shuttle, and I had to get used to the atmosphere; outside the spaceship, I could feel a sort of solemn air. I wouldn’t define it heavy, but regal, serious. The fog and silence all around me made it obvious to think I just landed on an uninhabited planet.

I wandered aimlessly for a while, acting circumspect by any given signal. Along the way, a pearl caught my attention: the smooth and mark-free surface of the gem reflected a light. “Someone must have lost it.” I thought while scanning the object looking for human traces around me. Then a sudden and far off noise broke the silence: it was an indecipherable complaint. From my perspective it seemed like it came from a path leading to a cave. I picked up the pace, and once in the cave, I noticed a ceremonious change in the air. Another objection interrupting the silence, this time echoing clearer: “Bow down.” I was moving around the high walls space with extreme caution, trying not to stumble upon the items occupying the entire place. I couldn’t hide my fear. The voice grew insistent: “Bow down!” Clumsily looking for a way to show some respect and reverence, I surrendered to a bowing.

With my eyes fixed on the ground, I finally met the owner of that voice. A crown. A crown scolding me, nonetheless!
<< Finally you decided to show some respect. I shouldn’t be the one telling you to make an act of reverence.>> I blushed: << I’m sorry, I wasn’t expecting to meet you here.>> <<Really? Weren’t you expecting me? I’m the one that should say that! You landed in my empire,>> sighed, <<Uh, you modernist can’t stand the weight of history. Tradition is too heavy for your wired world. Isn’t it?>> The cave was filled with objects: paintings, ancient coins, handwritten letters, and then old black and white pictures, silk fabrics, roses, and even a vintage perfume bottle with its nebulizer. The fascinating thing is the unique charm of time-honored that these elements seemed to share.

<<Uhm, I didn’t mean that. I’m sorry, your Majest…>> I couldn’t finish my sentence without feeling stupid. After all, I was talking to an inanimate object. I took the crown in my hands, determined to find its owner. << Excuse me, with all due respect, who owns you?>> The crown, unperturbed, answered: <<Well, first of all, I can tell you are disrespectful, contrary to what you say. Secondly, I represent Heritage, and no one owns me! Actually, I’m looking for a carrier: more precisely a bearer, because it’s not just about carrying a crown but bearing the responsibilities that come with it.>> The situation was quite confusing, and I couldn’t take it seriously.

I was standing in a regal cavern, holding and speaking to a crown. I quickly looked at the surroundings and glimpsed a pedestal in front of me. The logical result was: “Probably the crown fell from there;” what I couldn’t tell was: “who lived there?” <<Oh, I see. Yet, what does heritage truly means?>> At this point, I felt some sort of disheartening coming from the royal object, yet with no sign of impatience in the voice, it calmly replied. <<Authentic heritage is formed upon actual traditions and values; is made of life struggles, of acquaintanceship of practices, of mastered skills, and passion handed down over generations. Heritage comes from the past. It’s about the origins, and real legacy showcases these roots with no new elements added. The problem now is that I can’t find any carrier up to me. As I said before, you don’t wear the crown it’s the crown that wears you. You can’t have a hold on heritage, it has a hold on you. You have to be the perfect vessel that keeps it going, and, in due time, it will show you the appointed one to hand it over.>>

Finally, the crown released the sense of discomfort and discourage withheld behind its great and noble appearance. I was charmed by its presence and demeanour. Yet, all that beauty was jealously kept secret, and afar from all admiring eyes. The crown continued: <<Heritage has high-quality standards, it focuses on the knowledge of artisans, on the process of such culture, which passes from father to son. But you, modern people, you don’t have the time to learn from your past, you don’t have the patience to earn something.>> I instinctively rolled my eyes. The good for nothing young people saga! I had to interrupt the monologue. <<Excuse me but, what I see is a sort of nostalgia: a bittersweet longing for the past, that for sure was great, but I’m equally positive had something which needed some adjustments. Otherwise, I wouldn’t see a reason for you to be here all by yourself surrounded just by memories.>>

The crown started fuming, and I could visibly see the outlines becoming agitated. I tried to recover the peace. <<No, I never meant anything by it. I’m just trying to help you find your perfect vessel. What I meant is, from my point of view, heritage suppose to make a better future by developing elements from the past. I’m not stating it. I’m quoting a poet from the past, so you should agree.>> The crown looked thoughtful, then tranquil. So I proceeded: <<This nostalgia is what is separating us. I don’t see a link between you and me, but we can find it. Maybe, if we connect, we can find the perfect embodiment of Heritage.>> I wasn’t sure the crown wanted my help; I was feeling a bit uncomfortable and wanted to leave.

After what seemed forever to me, the crown heavily sighed, replying: << I guess we should start from something. If you are serious about helping me, you should follow some of my instructions. I’ll let you find the perfect candidate for me, but you shouldn’t change the values on which I build my legacy. Don’t invent nor try to wing it. You should resp… >> <<Sorry for interrupting. Again. Where is the innovation then? We should change the course and let our “vessel” be part of the cabin crew.>> I never took notice of the glittering empty spool placed on the pedestal before then. All at once, a colorful and precious thread started enfolding it. I moved my attention back to the crown. <<You enjoy interrupting me. I don’t see the point of your apologies. You said you need a connection. There’s the link, but I need you to respect the code of Heritage. So, take the thread with you, and as I was saying, don’t invent. Go through history and learn to be patient.>>

Perhaps I grew used to the atmosphere because it suddenly didn’t feel as uncomfortable as in the beginning. I carefully placed the crown back to its stand and took the spool of thread, heading back to the spaceship.

Now, while I try to get sleep, I recall the conversation with the crown. The words that race in my head: connection, patience, and time.